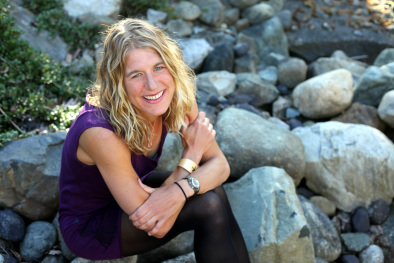 Photo taken by Jeannie Spencer
My sporting history goes back to ice skating at our local rink in Calgary Alberta where I believed I was Olympic caliber material. I realized that I didn't like the cold so instead jumped into the water. I pursued synchronized swimming for 11 years and focused on my dream to represent Canada at the 2000 Sydney Olympics. Although I encountered much success this dream was never realized.

Triathlon came about after earning a Bachelor of Arts degree in Psychology, a Masters in Public Administration and traveling the world as an active travel guide for Backroads. In 2005 while working for the Canadian Government as a Senior Planner for the 2010 Olympic and Paralympic Winter Games I needed to channel my immense energy. I did my first sprint triathlon and won my age category. Later that summer I completed my first Olympic distance triathlon and won first overall woman. There was no turning back; I was hooked by the sport. I received my elite card status in 2006.

I started with Olympic distance draft-legal racing. I raced bikes at local races in Canada and the United States. Although successful at the Pan-American Cup level of racing I realized that my future was in longer-distance non-drafting triathlons. I became a full-time professional triathlete in 2010 and changed focus to half IRONMAN events in 2011. Through my career, I raced all distances of triathlon, saw the world and made many friends.

Since retiring in 2013 from professional sport I have led Age Group Team Canada to International Triathlon Union (ITU) World Championship events and organized IRONMAN events. Since 2010 I have coached athletes in triathlon and endurance sports around the world from Dubai to Victoria, BC. I live in Victoria, Canada, race for fun and strive for healthy living every day.